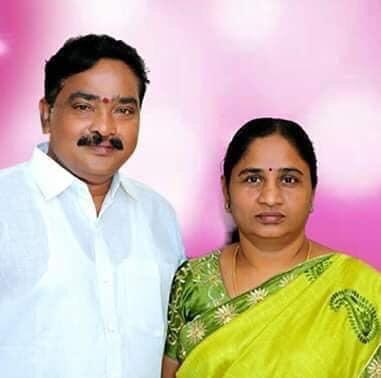 Sudhakara Rao Mondithoka
He was born on June 10, 1968 in Madhira to Mondithoka Premanandam and Sarojinamma.
Premanandam took part in the Indian independence struggle against the British. He took an active part in the post-independence Telangana armed struggle and later continued his life as a headmaster.
Raised in the spirit of his father’s life, Sudhakara Rao completed his schooling at Government High School (CPS) Madhira from Class 1 to Class 10 from 1975 to 1985.
Sudhakar Rao completed his Intermediate from Bapuji Government Junior College, Siripuram, Madhira Zone, Siripuram from 1985 to 1987 and his B.Com Degree from Government Degree College, Madhira in 1990-93 and his M.Com from Osmania University, Hyderabad in 1994-96.
Sudhakara Rao married Nagarani on December 13, 1999. The couple had two children.

Sudhakara Rao, who listened to the socio-political issues discussed by those who came home for his father as a child, became interested in politics during his school days.
Sudhakara Rao joined the National Students Union of India (NSUI), an affiliate of the Congress party in Intermediate, as he could not concentrate on his studies in the daily political environment at home.

Sudhakara Rao, who came to the notice of the Congress party leaders while working as a student union leader, was appointed as the NSUI president of Madhira Mandal in 1988.
Sudhakara Rao’s interest in education is reflected in his ability to continue his studies without interruption as he struggles with many student issues as a student body leader.
After completing his post graduation, the late former minister Seelam Sidda Reddy promoted Sudhakara Rao, who had taken up several positions in the Youth Congress from the student body and was fighting over student youth issues.
In an effort to strengthen the Congress party, Sudhakar Rao was taken into the Madhira Mandal Congress Party Committee on the instructions of former minister Sidda Reddy.

Sudhakara Rao, who has been active in the Congress party with the blessings of former minister Seelam Sidda Reddy, soon became a key supporter of former Union Minister Smt. Renuka Chowdhury and took up zonal and district level posts in the Congress party.
Sudhakara Rao, who worked to solve the problems of the people and strengthen the Congress party, contested as M.P.T.C. in 2006 and lost by a narrow margin of just 4 votes.
Sudha, who grew up to be a leader playing a key role in the party at a young age, was defeated due to backlash from some leaders who thought it would hinder their positions in the future.
The defeat as M.P.T.C.

Defeat as M.P.T.C. could not stop Sudhakara Rao. In the same year (2006) he contested as a 10th ward candidate in the city panchayat elections and won with a majority of 200 votes.
During his tenure as a councilor, he sanctioned funds of Rs 1 crore to provide cement roads, side drainages and other infrastructure to the people in the 10th ward.
Sudha showed the unprecedented development in the 10th ward before 2006.
In 2009 he served as the election agent for the M.P. segment Madhira constituency.
Sudhakara Rao, who strongly believed that women should grow up in all fields, encouraged his wife Nagrani, who had already completed her degree after marriage, to pursue a Bachelor of Education (B.Ed.,) degree, in line with her progressive views.
Sudhakar Rao contests his wife Nagarani as a councilor in the 10th ward in the 2014 local body elections due to the reservation of the post of municipal chairman for an S.C. woman.

No matter how hard the opponents tried to prevent Nagarani from winning, the people who could not forget the progress made in Sudhakara Rao ward in 2006 won Nagarani in the 10th ward with a majority of 300 votes. Sudhakara Rao worked tirelessly for his wife’s victory in this election.
Madhira constituency Congress legislator and current CLP leader Mallu Bhatti Vikramarka has sought the appointment of a Telugu Desam Party councilor as chairman against the candidature of Sudhakara Rao’s wife for the post of chairperson.

The whip was issued to Congress party councilors who were adamant that Sudhakar’s wife should not be elected as chairperson anyway.
Without defying the party’s orders, Sudhakara Rao displayed his political acumen and made his wife cast her vote for the party candidate in favor of the whip issued by the party.
Sudhakara Rao was able to elect his wife Nagarani as the chairperson by turning the Congress party councilors to the opposition councilors in a manner that did not live up to Bhatti Vikramarka’s speculations. Sudhakara Rao displayed his political prowess throughout the chairman election episode.
On November 6, 2015, Sudhakara Rao along with his wife Naga Rani, 11 councilors, over 2,000 followers from his community in Madhira town, along with well-wishers from various communities joined the ruling TRS party at the invitation of State Roads Buildings and Women and Child Welfare Minister Tummala Nageswara Rao. .
Sudhakara Rao worked hard for the victory of Balasani Lakshminarayana in the local body M.L.C. elections.
In the 2016 elections to the Khammam Corporation, Sudhakar Rao was appointed in-charge of 20,27 divisions, working for the success of party candidates in those divisions by implementing his plans.
Sudhakara Rao, who was in-charge of the divisional in-charge of Birolu, Eluvari Goodem, Dammai Goodem, Kukkala Tanda, Menu Tanda and Medida Palli villages in the Thirumalayapalem zone in the Paleru Assembly by-election contested by his political mentor Tummala Nageswara Rao, worked hard to get a majority in those villages and Sudha Rao won the Tummala victory.
Sudhakara Rao effectively handled the responsibilities assigned by the T.R.S party supremacy.

Sudhakara Rao implemented plans to lead the Madhira Municipality towards development by discussing his ideas with his wife Naga Rani, the Municipal Chairman, through his own vision.
Sudhakara Rao did not step anywhere in the power of his wife Naga Rani who was the Municipal Chairman.
Sudhakara Rao, with the help of his political mentor Minister Tummala, succeeded in sanctioning Rs 15 crore exclusively for the development of Madhira Municipality by Municipal Minister Kalwakuntla Taraka Rama Rao.
With the special initiative of Minister Tummala Nageswara Rao and with the sanction of funds in collaboration with the Municipal Minister KTR, about 5 km of central lighting in Madhira town, road dividers as part of the green belt and large-scale plant cultivation and 11kV. Power Substation, Three Phase Power Supply at Madhira, Construction of Park at SC Colony, Construction of Mission Bhagiratha Pipelines, Development of Hindu Cemetery and Transformation of Smriti Van

Efforts to sanction 1 acre of land for SC Cemetery, construction of cement roads and side drainages within Madhira Municipality as well as infrastructure required by the people.

Contrary to the saying that there is a woman behind every man’s success, Sudhakara Rao’s hard work is certainly commendable behind his wife Naga Rani’s excellence as Municipal Chairman.
Having been in politics for 30 years, he continued in the public service through his tenure, reaching out to all sections and gaining a unique identity of his own.
Sudhakara Rao, who has been in the public service for a long time, entered the legislature with the blessings of his political mentor, former minister Tummala Nageswara Rao, in collaboration with TRS Working President Minister KTR, and aspired to work for the betterment of the poor and weaker sections of the people.