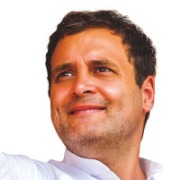 Rahul Gandhi is a natural politician and a leader who has the potential to transform India.Rahul Gandhi believes in the power of every Indian to contribute to the progress of India.
Born:19 June 1970
Father’s Name: Late Shri Rajiv Gandhi
Mothers Name: Smt.Sonia Gandhi
Birth place:Delhi
Education qualifications: B.A.,M.phil. Educated at Rollins college,Florida Trinity college,Cambridge university,U.K.
Rahul Gandhi born in Delhi on 19 june 1970, the first of the two children of RajivGandhi, who later became the prime minister of India, and Italian- born Sonia Gandhi,Who later became the president of IndianNationalCongress, and as the grandson of prime Minister IndiraGandhi.He is also the great-grand son of India’s first prime minister,JawaharlalNehru. PriyankaGandhiVadra is his younger sister.

Rahul Gandhi Born on 19 june 1970.Rahul Gandhi spent his early childhood between Delhi, the political center of India,and Dehradun. Rahul Gandhi attended St.Columbia’s school,before entering The Doon school in Dehradun,from 1981to1983.Rahul father had joined politics and became the Prime Minister on 31oct1984when Indira Gandhi was assassinated Due to the security threats Rahul and his sister,Priyanka were home-schooled. He began his under graduate career at Delhi’s St.stephens college before moving to Harvard university in the USA.In his second year,Rahul transferred to Rollins college in Florida due to security threats following his father’s,the late Prime minister RajivGandhi’s assassination. RahulGandhi graduated with Bachelor’s degree in 1994.The year after,he obtained his M.phil from Trinity college,Cambridge.
Rahul began his professional career with the Monitor Group,a management consulting firm based out of London-he was adamant on creating a professional career before joining politics. He soon returned to India and set up his own technology consultancy in Mumbai,where he led his team as the director.

Rahul’s first foray in to active politics was in 2004,when he Contested the LokSabha elections from his father’s former Constituency Amethi.He won his first election by over one lakh votes.He became an M.P.in 14th Loksabha.In 2007 he was appointed the congress general secretary. He also took charge of Indian youth Congress and the National students union of India.In 2009 Rahul Gandhi re-elected to 15th Loksabha from same constituency.He defeated his nearest rival by a margin of over 370,000 votes.Rahul Gandhi studiously refused any cabinet position under the terms of the ManMohanSingh-led UPA government. In 2013,Rahul was appointed as the Congress vice-president.In 2014 Rahul was re-elected to 16th Loksabha.He served as the President of the Indian National Congress from 16 December 2017 to 3July 2019. In the general election 2019 Rahul had Contested from Waynad Constituency in Kerala and his seating Constituency Amethi also but faced a defeated by BJP’S smriti Irani in Amethi.Rahul was re-elected to 17th Loksabha after winning from Waynad Constituency in Kerala in the general election in 2019.Later owing to the flop show of Congress in the general election. Rahul Gandhi resigned from the post of party President.

Rahul Gandhi has always been the strongest proponent of politics of purpose. Over the years,he has lent his voice to a number of issues but has always remained focused on propagating non-violence,equality and justice. He has imbibed these virtues through a lifelong trust with Indian politics and history and has developed a keen understanding of the Indian-social fabric. Having experienced the pain of losing both his father and grandmother to acts of violence and hatred,Rahul Gandhi has always been a champion of Gandhian philosophy of ahimsa and truth.