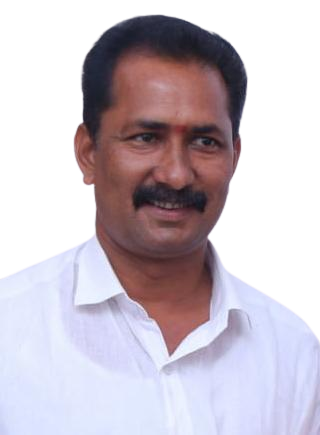 After studying up to SSC, he completely stopped his studies and changed his favorite agriculture as a career and entered the poultry sector in 1992 and became successful in that too.

Krishna Prasad, who has a very hard-working attitude, still takes care of his farm every morning and at some time of the day he goes to his poultry and supervises himself.

Bikki Krishna Prasad, who not only achieved success as an agriculturist and poultry owner but also became a successful realtor by buying and selling lands, got married to Anita on

in peoples clinic Madhira Prasad’s education continued from 1976 to 1986 in Madhira.He was elected as the class representative in the student union elections at the school level Uninterested in politics, Prasad settled in the field of agriculture and poultry after dropping out of his studies and from the moment he realized his imagination, in the Telugu Desam Party founded by N.T.R.
Krishna Prasad, who has a good reputation among the people by working for farmers on their issues, being an active activist, mild-mannered and soft-spoken, was fielded as a Telugu Desam Party candidate (Rompimalla, Athkuru, Madhira Segment ) in the 2014 Rythu Seva Sahakaara Sangham elections.Kona Mohana Rao and Brahma Reddy stood as candidates of Y.C.P and C.P.I parties as opponents to Bikki Prasad. Prasad who has good relations with the farmers won as a T.D.P candidate and was *elected as the president of Madhira Rythu Co-operative Society which has a membership of 23 villages of farmers on 05-02-2013.

Being an agriculturist by nature, Prasad, as the President of the Society, took steps to ensure that the farmers get all the facilities provided by the government, he ensured that every farmer gets the fertilizers and seeds required by the farmers during the agricultural season on a timely and proper basis at the subsidy, similarly, he thought that the office of the Society, which had been operating in rented buildings for many years, should have its own building, and his name as the President of the Society should remain forever. He initiated the construction of the new building with strong determination. On 8 March 2018, Bikki Krishna Prasad laid the foundation stone for the construction of the new building of the society.

The new building of the society was inaugurated by Krishna Prasad on 1st April 2019 with Vedic mantras scientifically without any interference from others. In 2019, Prasad, who was well-respected by running the Madhira Rythu Seva Cooperative Society consisting of 23 villages, joined the T.R.S party in the presence of Khammam MP Nama Nageswara Rao as part of the political mobilization in Khammam district in 2019.
In the prestigious Madhira Municipal Elections, his wife Mrs. Bikki Anita was forced to contest in the 13th Ward in order to field the TRS party candidates against the Congress Telugu Desam alliance candidates.
Against Smt. Anita
Smt. Durga, wife of senior CPM Party leader and Madhira town celebrity Bikki Raja, has contested as the alliance candidate.

Prasad’s hard work is behind Ms. Anita’s victory as a councilor with a huge majority of 175 votes. The people of 13th ward won Ms. Anita with their trust in Krishna Prasad. Krishna Prasad’s couple is doing many development works in the 13th ward to maintain the trust of the people.At the time of the completion of his tenure as the chairman of the society, the government issued an order extending the tenure of the governing body of the society, so he continued in the post of chairman for another two years, in 2020, the government issued a notification for the election of the society, after serving as the chairman for about 7 years and gaining a good reputation among the farmers, the TRS party announced Krishna Prasad as the chairman candidate. .
Apart from the previously contested segment, this time he contested in the Allinagaram, Madupalli, Buchireddypalem segment and won a resounding victory over his rival Congress and Telugu Desam Party alliance candidate Veeramachineni Srinivasa Rao. Bikki Krishna Prasad was elected for the second term as the President of the Co-operative Society on 16 February 2020.

Krishna Prasad, with the help of his staff, has been working with his staff to take the Madhira Rythu Seva Co-operative Society, which has a membership of 3200 farmers in 23 villages, from a loan facility of 2 or 3 crore rupees to being able to give loans to farmers of 7 to 8 crore rupees today.

Bikki Prasad stands by the farmers by setting up grain purchase centers in many villages under the society, buying grain from farmers, selling fertilizers and providing seeds at 60 percent subsidy. He says that the main aim of the society is to strengthen the farmers financially by providing loans instead of loans to farmers by approaching private traders for investment.

Young and dynamic Bikki Krishna Prasad, Chairman of Rythu Sahakara Sangham, is working as a farmer’s partisan with the all-round development of farmers as the main objective.